Share All sharing options for: Who Killed the Cleveland Indians? - part 1: John Adams 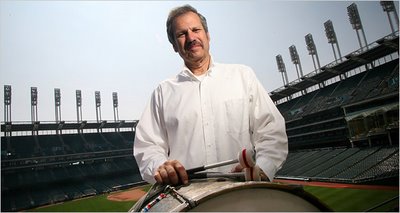 Rumor on the street has it there's been a death.  Witnesses report hearing two shots and sounds of a severe beating last night, and now the Cleveland Indians season has gone missing.  While it can't be confirmed, the possibility of a homicide necessitates further investigation.  Have no fear, loyal fans, I am on the case.  In what will no doubt be a long and grueling investigation (or at least till October), I'll explore if the Indians season is dead and if so, who is to blame.

Motive: If it was Adams, it was probably voluntary manslaughter.  He seems to mean well with his faithful and unending drum beats.  And from seats behind home plate the echo of his drums are great.  But then again...the portion of the Indians team in closest proximity to Adams is the bullpen, Grady Sizemore, and our LFers.  Needless to say this is not the highest performing group.  Perhaps Adams drumbeat, like the unceasing beat of Poe's Tell-tale heart, has produced a kind of sonic fatigue damage in the ears, the center of balance, of this critical portion of the team.

Up Next: Slider (hmmm....Raffy Perez seems to be missing his slider....)