Cliff Lee, and now Fausto Carmona, both vital parts of the 2009 Indians, have been rocked in their first starts. Given who's following them in the rotation, that's not good.

Carmona never got into a rhythm tonight. One at-bat his pitches were on downward plane, the next at-bat his sinker was on a horizontal plane. And because of his wildness, the Ranger hitters didn't have to chase his out pitches, for they were dictating the action, not Carmona.

The offense got going in the middle innings, chasing Vicente Padilla in the sixth, but they didn't take advantage of Ranger errors and couldn't finish rallies that they started. Grady Sizemore and Mark DeRosa struck out in the eighth, quashing what was the best chance for the Indians to really make a game of it; they both represented the tying run during their at-bats. Earlier in the game, Ben Francisco popped out with the bases loaded and one out.

Raffys Right and Left both gave up solo home runs. The runs kept the Ranger margin at least three runs through the late innings, a deficit small enough to elicit hope, but large enough to make a comeback unlikely.

It's way too early to make anything of individual offensive performances, though Travis Hafner "looks" comfortable and the plate; it seems like he's seeing pitches much better than he did all of last season.

Now it's up to Carl Pavano to help salvage a game in this opening series. Gulp. 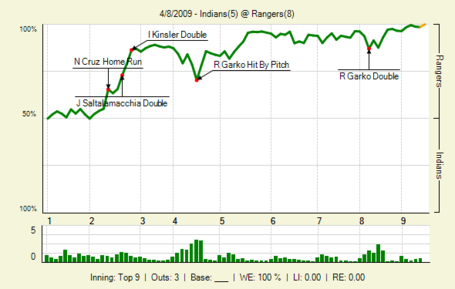