From the Archives: 1948 Opening Day Program

Share All sharing options for: From the Archives: 1948 Opening Day Program

Opening Day optimism from 61 years ago: 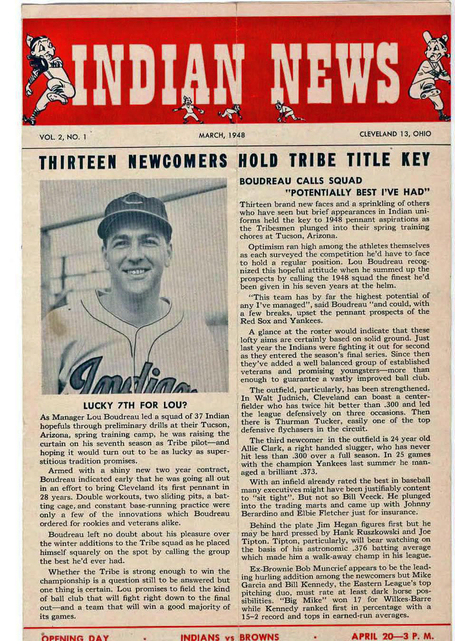 Some background info is probably needed. The Indians had made great strides in 1947, Bill Veeck's second year as owner, finishing above .500 and in the American League's first division. Joe Gordon paid immediate dividends in his first year with the team, posting a 135 OPS+, turning an anemic offense into a credible one.

After the 1947 season, Veeck made many more moves, adding center fielder Walt Judnich and starting pitcher Bob Muncrief (trade with the St. Louis Browns), infielder Johnny Berardino (another trade with the Browns, to keep him away from Detroit), and outfielder Allie Clark (trade with the Yankees). Russ Christopher, a tall right-handed reliever with a funky underhand delivery, was purchased from the Athletics just before Opening Day.

But the big story of that offseason was the almost-trade of Lou Boudreau. Veeck had acquired the aging Al Lopez during the 1947 season, setting the stage for him to become the next Indian skipper. After the season, Veeck arranged for Boudreau to be dealt to the Browns, but the deal leaked to the public, and the fan outrage was so vehement that Veeck had to not only rescind the deal but to very publicly acknowledge his stupidity in thinking of dealing the star shortstop and manager. Veeck ended up giving Boudreau a lucrative two-year contract.

Jim Hegan, the incumbent catcher, was again supposed to be challenged for playing time because as good he was defensively, he couldn't hit. His competition this year was Joe Tipton, who had excelled in the minors the previous season. 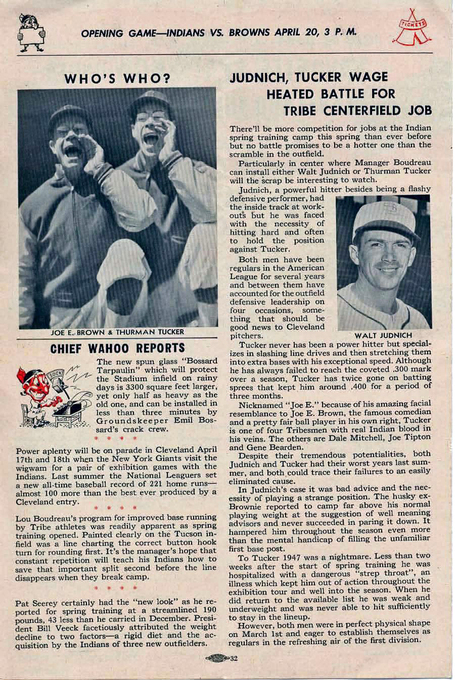 The biggest offensive hole in 1947 was center field. Catfish Metkovich was the everyday center fielder, but he hit just .254/.302/.362, and was dealt (for Berardino) after the season. To help fill that hole, the Indians brought in Walt Judnich to compete with Thurman Tucker for the job.

Sometimes all those optimistic preseason predictions can come true.