The Red Sox charitably allowed the Indians back in the game last night. Tonight the Indians returned the favor.

Fausto Carmona is trending in the right direction. For a span of three innings he was the dominant pitcher from 2007, throwing pitches that couldn't have been put into the air by a catapult. At one point he retired twelve in a row, and the game was slowly but surely edging towards a solid victory for the Indians. Carmona took a 5-0 lead into the sixth and got the first two batters of the inning to ground out. But Jason Bay, who had been a force all series, drew a seemingly innocuous walk. Two doubles later, the lead was three, still a decent margin, but now within striking range.

The Indians had had opportunities to build a bigger lead early in the game, and perhaps knock starter Jon Lester out of the game quickly, but after Shoppach's home run with no one out in the fifth, he settled down to retire the next nine batters and hand over the game to the bullpen with a surmountable deficit.

The game was still firmly in hand as the eighth started; a three-run lead is a pretty safe lead with six out to go, as the FanGraph attests. Even after Boston got runners on first and second, the odds were in Betancourt's favor to leave at the end of the inning with the lead. But Mark DeRosa's bobble of a possible double play opened the door wide for the comeback, and the two singles later, the game was tied. A day after a couple of botched force plays handed the Indians a victory, the Indians let Boston back in the game.

Once the game was back to even, Cleveland was at a disadvantage thanks to a lack of back-end options. Kerry Wood wasn't going to pitch on four straight days, and Tony Sipp wasn't available after throwing in two straight. It fell to Jensen Lewis, who had given up the game-scoring single, to pitch multiple innings.

The Indians were only going with a two-man bench thanks in part to yesterday's short outing by Anthony Reyes, for instead of replacing the injured Travis Hafner with a position player, the Indians needed to add one more arm to the bullpen for just this one game. So Kelly Shoppach was the DH for this game, the first time either catcher DHed all season. When Victor Martinez walked with one out in the ninth, he would have been taken out of the game in favor of Trevor Crowe had the Indians had even a three-man bench. But since the game was tied and removing Martinez would have meant losing the DH, Wedge had to let him run for himself. The way things played out afterwards, Crowe wouldn't have scored, but who knows how he would have affected Okajima's pitches to Shin-Soo Choo.

After the Indians failed to score in the eighth and ninth innings despite a couple good opportunities, Lewis came out for the tenth, and almost pulled off a 1-2-3 inning. With two outs, Jonathan Van Every stepped to the plate, a former Indians prospect who had lots of power but had trouble making contact. Unfortunately he connected on a high fastball and crushed his first major-league home run far over the center field fence. And for the second time in three games, the Indians lost a game in which they had gone into the ninth tied, a situation that normally favors the home team. 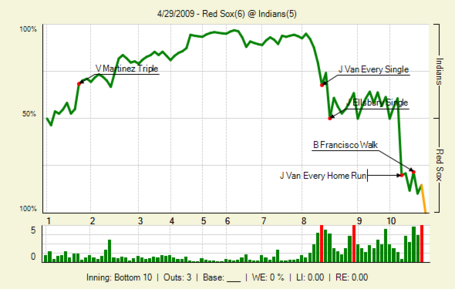