It was fitting that this bizarre game ended on a pitcher dropping a simple flip at first base. With two outs in the bottom of the ninth and Mark DeRosa at second, Asdrubal Cabrera hit a grounder wide of first, and Kevin Youkilis made a very good diving play in getting to the ball. All that remained was to toss the ball to the pitcher covering the bag, and the game would go to extra innings. But Javier Lopez couldn't watch the ball and find the bag at the same time, and the ball bounced off his mitt. DeRosa, who with two outs had kept running, crossed home plate, and the Indians celebrated their first walk-off win of the season thanks to an error.

The weather had changed dramatically since yesterday. Gone was the summer-like weather, replaced by seasonably cool temperatures with a mist hanging over the ballpark. The wind had also shifted, and was blowing in. Seems like a perfect recipe for another pitcher's duel? The only pitching duel tonight was the battle to get out of the third inning. Starters Brad Penny and Anthony Reyes were in constant trouble from the beginning of their outings, giving up runs in each of their three innings of work. Reyes only lasted two innings, and Vinnie Chulk had to pitch very well to keep Anthony's runs allowed at seven. Penny walked out to the mound in the bottom of the third up 7-3, but he couldn't even hold that lead, though his defense helped set up the inning. Mike Lowell threw wildly to second with one out, and instead of turning a double play and ending the inning, a run scored, leaving runners at first and second and still one out. Ben Francisco made Penny and the Red Sox pay, catching up to a high fastball and hitting the foul pole for a three-run game-tying homer.

The bullpens then took over, and both were very effective, allowing just one run apiece until the bottom of the ninth. Tony Sipp again was outstanding, striking out three in 1.1 innings. The Red Sox took the lead once more in the seventh, but a Mark DeRosa homer in the bottom of the inning tied the game again. Kerry Wood, brought on in the exact situation as last night, pitched his way out of a major jam, and this time kept Boston off the scoreboard, setting up the bottom of the ninth.

The Red Sox loss ended an eleven-game winning streak, and to tell the truth, they did more to lose this game than the Indians did to win it. Four of the Indians' nine runs were unearned, including the winning run. But a win as ugly as this counts the same in the standings as the Indians' 22-4 massacre of New York last week. 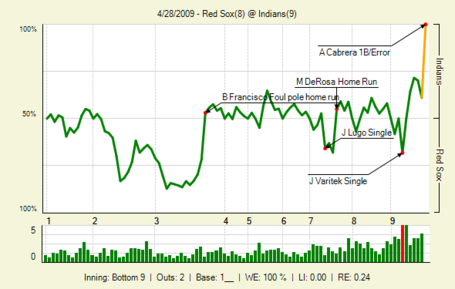