It's easy to view Cliff Lee's Cy Young season as a fluke season by a decent starter. It's certainly easier than to try to explain how a pitcher who had been banished to the minors the season before remade his game in just a single offseason, transitioning from a flyball pitcher with a deceptive fastball and an occasional breaking pitch to a true four-pitch pitcher with exceptional command of said fastball. It's the type of transformation that can be a refreshing challenge to deep-seated assumptions about the career arcs of baseball players.

Consider Lee's opponent tonight. The Boston Red Sox came into tonight winners of ten in a row and with a locked-in lineup. They lead the league in on-base percentage and OPS, and featured two hitters with an OPS over 1.100. Kevin Youkilis is the toughest out in the AL, getting on base at a .549 clip. Lee took on this tough assignment, and more than just passing it, made it look relatively easy. He went eight innings, throwing 106 pitches, 70 of them for strikes, and didn't walk a batter. There is no way the old fastball & flyball Cliff Lee would have lasted five innings against this lineup, never mind eight shutout frames.

Lee had a couple jams to work out of, including a bizarre sequence in the fourth. He got Mike Lowell to foul tip a curve into Kelly Shoppach's glove, but as the players were leaving the field, the first base umpire correctly ruled that the ball hit the ground before Shoppach snared it. Lee returned to the mound, and threw another curve to Lowell; this time the ball was put in play and bounced down the line into Mark DeRosa's glove. He stepped on third to end the inning. Only home plate umpire C.B. Bucknor ruled the ball foul. STO didn't really show a good replay, but DeRosa was incensed, and Eric Wedge had finally had enough. He probably made up his mind before he left the dugout that he'd get himself tossed. Bucknor obliged him. So now Lee had to return to the mound after the excitement and throw yet another pitch to the Mike Lowell. To his credit, he threw one more curve, and this time Lowell couldn't pull the trigger.

But as well as Lee pitched, Tim Wakefield matched him in his own unique manner. He'd been very effective this season, and the unusually-warm April evening helped make his dancing knucklers a bit more vivacious. The Indians couldn't manage a hit after the first inning, though they did have opportunities to score, the best probably being the sixth inning, when Grady Sizemore stole second with nobody out. But Wakefield escaped that threat, and lasted until the seventh.

With Lee going eight, the Indians could bypass their setup guys and bring Kerry Wood in for the ninth to set up a walk-off situation in the bottom of the inning. But after Wood gave up a bloop base hit (which would have been caught had the Indians not been playing no-doubles defense) and a walk, Jason Bay jumped on a mistake fastball and blasted a three-run home to the bleachers. With that, eight innings of shutout ball came to naught, and the Red Sox were well on their way to winning their eleventh in a row. Two-and-a-half hours of built-up excitement was extinguished in one swing. Lee's pitching performance remains as a small token consolation, but, man, this one hurt. 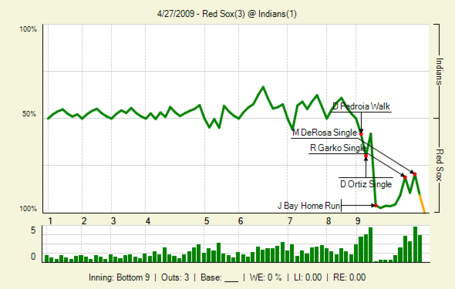