For a change, the Indians took the lead first, scoring in the first inning and three more in the third. They couldn't put the Twins away with the offense, but Aaron Laffey and the bullpen was up to the challenge.

Laffey continued to pitch to contact, getting 14 outs on the ground, including 2 more double plays. He cruised through the sixth with a low pitch count, but ran into trouble in the seventh by loading the bases with one out. Jensen Lewis was summoned, but he made the situation worse, giving up a Denard Span single (scoring two) and walking Brendan Harris, re-loading the bases, and more importantly, bringing Justin Morneau to the plate.

Eric Wedge then brought in Tony Sipp, who had made just one appearance in his major-league career, to about as high-leverage a situation as a middle reliever will face. The advantage to bringing in an inexperienced reliever is that the opposing team wouldn't have seen him, let alone time up his pitches. Sipp struck out Morneau on a fastball at the top edge of the strike zone, then got Jason Kubel with a slider away. That was the turning point in the game.

Rafael Betancourt pitched the eighth, and retired the side in order. He seems to be consciously mixing in more off speed pitches, and that made his fastball much more effective. And Kerry Wood shrugged off the first two Twins reaching base in the ninth, getting Denard Span to hit into a double play and locking up Brendan Harris with a breaking ball after he had fouled off several high-90s fastballs. Justin Morneau ended the game in the on-deck circle. 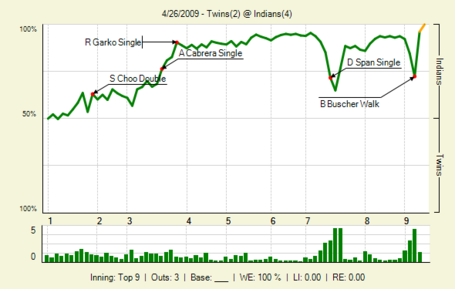