Kevin Slowey walked just 24 batters in 160.1 innings last season, one of the league's best ratios. If Brian Runge had been his personal umpire last year, the only walks he'd have had would be intentional. Runge's strike zone was consistent, but very wide. Slowey took advantage of the wide zone to silence the Indian bats for eight innings; only in the ninth, when he began to tire, did the Indians manage to score a run.

The Twins have dominated the Indians in all facets of the game in these first two matchup, even offensively.They're still without Joe Mauer (who should return next week), but in this game they got contributions from most of their lineup. Jason Kubel hit two more home runs, and even Joe Crede added a homer.

After his disastrous first outing in Texas, Carl Pavano has been everything the Indians were hoping for, assuming they were hoping for a decent back-of-the-rotation starter. His final line looks a lot worse than how he pitched. In many cases he got his ground ball, but those grounders found holes in the defense. Pavano was chased in the sixth, and Rafael Perez relieved him. This time Perez had his slider working, and he looked much like his old self. Hopefully this is the first step towards him regaining his old setup role.

Just as the rotation and bullpen seem to be righting themselves, the offense has disappeared on this homestand. Victor Martinez is still locked in; he collected three more hits tonight, none of them cheap. But the supporting cast has fallen off dramatically. Mark DeRosa took another 0-4 hitting in front of Martinez; he came into the game hitting .214/.286/.371. Jhonny Peralta sat out tonight's game as he was in the midst of an 0-for-19 slump, but Little Giraffe, his replacement in the lineup, also took an 0-fer. 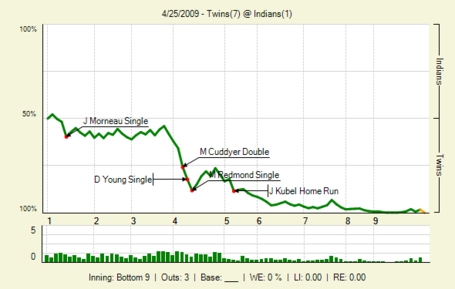