This game turned in the bottom of the third on a nice catch by Delmon Young on a ball hit by Victor Martinez. The Indians had just collected their third straight hit off Nick Blackburn, and had tied the game earlier in the inning. If Young drops the ball, or even lets it get by him, the game becomes a lot more interesting. After Young's catch, the inning ended quietly, and Blackburn wasn't in trouble again.

Fausto Carmona was more effectively wild than wild tonight, and lasted until the seventh. He struck out seven, and walked only two, which is a vast improvement over his season K/BB ration (8/10). He gave up yet another home run tonight, a no-doubter off the bat of Justin Morneau; he's already given up 5 homers in 22.1 innings of work, only two less than all of last year. But his defense didn't pick up their end of the bargain, either. A couple batters after the Morneau home run, Mark DeRosa made a diving stop on a ball to his right, but gaffed the relatively easy throw to second for the inning-ending force. The next batter slapped a ground-ball single through the left side, scoring the Twins' third run. And in the seventh, the Tribe infield made several poor plays on grounders that if played correctly could have shortened the inning or even completely defused the rally. Instead, Minnesota added two more runs to their lead, puting the game out of reach.

After the high-octane offensive attack in New York, parts of the lineup have fallen back. Victor Martinez is still hot, but Jhonny Peralta hasn't collected a hit since the 22-4 game last Saturday. 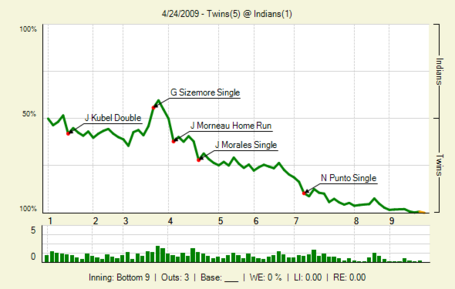