And the Cleveland Indians have won their first series of the 2009 season. A day after bringing Trevor Crowe to the plate as the potential winning run against the Royals' All-World closer Joakim Soria, the Indians again faced a critical late inning situation with Crowe scheduled to bat. This time, however, Wedge made a move that extended the inning and allowed the lineup to turn back over to the best player in baseball.

Coming into the 8th, the Indians hadn't produced a baserunner since the second inning and were trailing 2-1. Ryan Garko gave wings to hope by leading off with a double before being lifted for pinch runner Tony Graffanino, which seemed logical if you watched Garko slide into second on what would've been a stand-up double for Sal Fasano.  Ben Francisco followed with a bunt single that was thrown away by Gil Meche as he attempted to field it; Little Giraffe seized the opportunity to act on letsgotribe.com's collective impulse and ran through Joel Skinner's stop sign. Unfortunately, he was cut down at the plate by Alberto Callaspo as Kenny Lofton weeped. To give an idea of Graffanino's decision in this instance, Callaspo was backing up the play effectively enough that Francisco didn't attempt to advance.

Despite all these shenanigans, Crowe was still about to step in with the tying run at first base. Wedge opted for Travis Hafner instead, and Hafner singled, pushing Francisco to third. Asdrubal Cabrera then reached on a fielding error by Callaspo, with BenFran reaching home and tying the game. The best player in baseball then strolled in against Ron Mahay.  Mahay was supposed to smite Sizemore by virtue of the lefty on left matchup but, well, Grady Sizemore scoffed at that notion and planted the ball in the seats for a three-run homer.  5-2 Indians.

Kerry Wood then devoured Kansas City (the entire thing, although reports are that Posnaski survived), striking out two en route to a 1-2-3 save. Wood now has 11 strikeouts in 5.1 innings this season.

The other major storylines of the day were Anthony Reyes turning in a quality start (6.0 IP, 2 ER), Jensen Lewis going two relatively strong innings in relief, and Meche's 7.1 IP, 7 strikeout performance. The Indians are home against Minnesota tomorrow night, Carmona v. Blackburn. Cleveland comes into the series just one game back of the Twins. 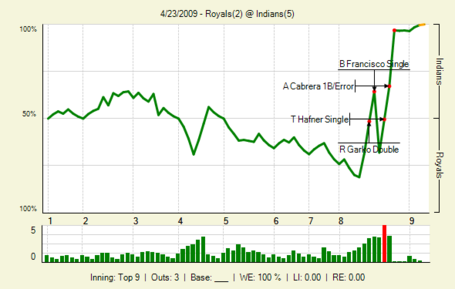