In five career starts versus the Indians, Brian Bannister has held Tribe bats to an anemic .183/.214/.300 line. The Indians have had plenty of time to diagnose his pitching tendencies, scout his pitches, and moreover, see his pitches. His stuff is rather pedestrian; his fastball tops out in the high-80s, though he makes regular use of several offspeed pitches. MLB as a whole has hit .270/.328/.442 off him over 1663 plate appearances. He didn't make the Kansas City rotation, as he had a poor spring after a disappointing 2008 season (182.2 IP, 5.76 ERA). In fact, tonight's start was his first of the season, against a hot-hitting Indians lineup that was working counts, hitting for power, and driving starters to the showers early.

In this case, the past won out over the present. The Indians again couldn't figure out Bannister's backwards pitching strategy, and for the first time since the opening days of the season looked anemic at the plate. The Indians managed four hits (all singles) and two walks in Bannister's 6 innings, then went in order in both of Jamey Wright's two innings of work. They got the tying run into scoring position against Joakim Soria in the ninth, but Trevor Crowe took one slow-mo curve too many, ending the game with a strikeout.

Cliff Lee went a team-high eight innings, and allowed nine hits and a walk, though he only faced a couple mild jams.  He's obviously still not pitching at his 2008 level, but on most nights, with normal run support, his outing would have resulted in a victory. Tony Sipp made his major-league debut, striking out the first batter he faced and retiring the next two on fly outs. There was no bullpen implosion tonight, thankfully, but there was also no lead to protect. 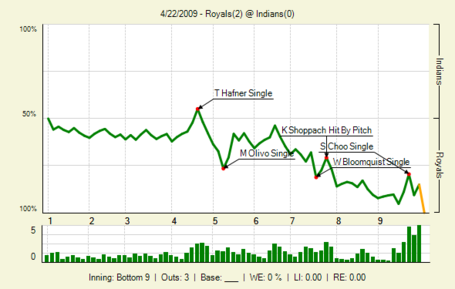