Everything set up through the first seven innings for an easy Cleveland victory, but the bullpen up to and including Kerry Wood made the game much closer than it ever deserved to be.

Aaron Laffey became the first Cleveland starter to finish seven innings, pitching a prototypical groundballer game. He induced a double play in five of his seven innings, which meant two things, one bad, and one good: he was allowing a lot of hitters to reach base (10), and he was getting lots of ground balls (only four outs occurred via a ball in the air). He had a decent strike/ball ratio (64/40), which combined with his ground outs, made for either quick innings or quick escapes from innings. Both of Laffey's starts have come against the Royals, who won't be mistaken for an offensive juggernaut, but he's given the Indians effectiveness and length in his outings, two qualities not common in starts this year. He's certainly earned himself a spot in the rotation for now.

The offense, which exploded in the New York series, continued to hum along, dispatching Sir Sidney by the fourth inning. The top six hitters in the lineup are all going well, especially Victor Martinez, who has been hitting everything hard recently. He finished his 4-for-5 game with a home run in the eighth, opening up a little daylight after the bullpen had quickly given up four runs in the top of the inning. And the Indians would need every bit of that lead.

For the bullpen, even given less outs to get, almost blew a five-run lead in one inning. Joe Smith started out the inning, having been brought out to face Mike Aviles but instead getting a left-handed pinch hitter (Brayan Peña), couldn't retire either Peña or David DeJesus, so Eric Wedge went to the best reliever in the 'pen thus far, Masa Kobayashi. He was worse, giving up a single to Mark Teahen and coming a couple feet from giving up a tying three-run home run to Mike Jacobs. After that Jacobs shot, Wedge took another spin on the Wheel of Fail, bringing out Jensen Lewis to try to stem the tide. He gave up another run on a sacrifice fly, but induced the sixth double play of the night from Miguel Olivo to end the threat. Victor Martinez homered in the bottom of the inning to push the lead to three, and with Kerry Wood coming in, everything seemed in order.

With one out, Wood gave up a swinging bunt single to Coco Crisp, struck out Mitch Maier, but then gave up a two-run shot to Tribe killer David DeJesus. He shrugged the homer off, striking out Billy Butler to end the game.

Even with an offense hitting on most of its cylinders and a rotation getting its legs under it, the bullpen has in the last five games blown two victories and tried its best to blow a third. Normally a weakness in one area of the club can be compensated for by strengths in a couple other areas, but the bullpen right now is a fatal flaw, eclipsing any good parts of the club by its ineffectiveness. Tonight's situation was about as easy an assignment as a bullpen can have: a 6-1 lead, and two innings to go. If they can't be counted on to protect a five-run lead, what's going to happen if the game's more seriously in doubt? 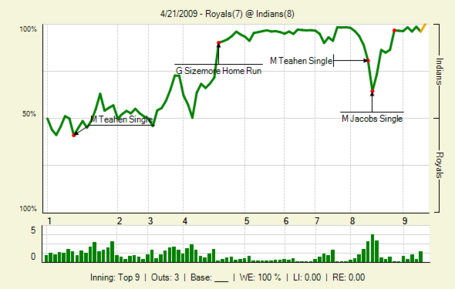