Carl Pavano made, under the circumstances, an outstanding start. This was his first start against the Yankees after leaving the organization last winter, and his tenure with New York was marred by almost constant injuries. Joe Torre added fuel to the fire over the winter by ripping Pavano in his book. To Pavano's credit, he didn't respond in kind to Torre or any of his other critics. I suppose he preferred to make his statement on the field, and he did so today. He gave up one run on four hits over six innings, and only got into one jam all day. He hit corners with his fastball, and got hitters to roll over on changeups outside after buzzing them inside with a fastball.

His only problems came after he left the mound. He was pulled after six, having thrown 89 pitches, mainly because (IMO) the Yankees were leading off the seventh with two left-handed hitters. The problem with that strategy was that Rafael Perez, the only southpaw short reliever in the pen, had been awful thus far. Given how Pavano was pitching and his decent pitch count, I would have much rather taken the risk of leaving him out at least for the first two batters than to go with the left-on-left percentages. Perez gave up a double to Robinson Cano, and a single to Hideki Matsui He was removed in favor of Jensen Lewis, who had also been struggling in 2009. Cody Ransom bunted back to the pitcher, and Lewis got Matsui at second. Jorge Posada then came to the plate, and in that at-bat, the game was decided, not by the players, but the umpire crew.

Posada hit a long drive towards the short porch in right field, and Trevor Crowe jumped at the fence to bring it in, but a couple fans reached over the fence and interfered with Crowe. The ball ricocheted back into the field of play, but the first base umpire called the ball over the fence and the Yankees took the lead. After Eric Wedge came out to argue, the umpire crew agreed to use instant replay to review the play. I think, looking at the replays they showed on STO, that fans reached into the field of play to hinder Crowe in making a play at the ball. I don't know if Crowe would have made the catch, and it certainly would have been an extraordinary catch had he brought it in, but the fan contact occurred in play, and the call certainly should not have been a home run.

The umpires did not comment on the call after the game, but their (second-hand) explanation to Wedge was that the ball hit the fan first, beyond the plane of the wall.

The controversy over the Posada home run should not overshadow the Indian setup corps blowing another game. Perez and Lewis, stalwarts down the stretch last season, right now can't be counted on to protect leads. While they'll probably get their acts in order down the road, they can't be pitching in hold situations now. Of course not many of the rest of the setup men are pitching that well either, so perhaps a move will be made on Monday to reconfigure things.

The game got out of reach in the eighth after Shin-Soo Choo let a Cody Ransom fly ball fall in, scoring three runs. I don't think Choo lost the ball in the sun; I rather think he misjudged it, which is even more of a mistake, for an outfielder should never give up a fly ball until he is certain the ball is out of play. Choo's been fantastic at the plate these first two weeks, but in the field he's made several major mental errors.

Next Up: An off-day on Monday, followed by the Royals on Tuesday. Laffey vs. Ponson, 7:05 PM. 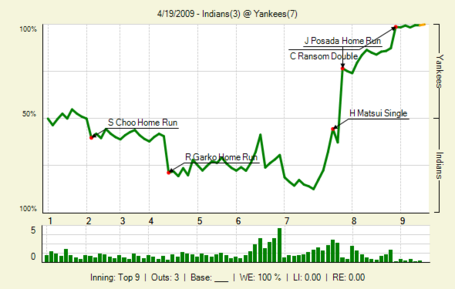