This afternoon's loss was as much a result of the bad starting pitching the Indians have put out there than it was Vinnie Chulk's bizarre fielding mishaps or Jensen's hanging fastball to Derek Jeter.  Coming into today's game, Indians' starters were averaging less than 5 innings a start.  The bullpen had already logged more than 36 innings.  And so when the Indians were protecting a 2-run they were forced to throw out one of the last guys to make the team, Zach Jackson.  And when he gave up a run, and at one of the peak leverage moments of the game, they had to rely on Vinnie Chulk, the other last guy to make the team.  And when he gave up the lead, they had to go to struggling Jensen Lewis.  This is why starting pitching matters, and why guys like Fausto and Cliff need to start getting some 7-inning performances.

Reyes didn't look awful starting today, but he's not going to hand over the lead to start the 6th allowing 3 HRs very often.  And his final out, a warning track shot that Ben Francisco ran down, nearly made it 4 HRs for the day and no lead.  The most painful moment to watch belonged to Chulk, who after allowing a leadoff walk to Johnny Damon in the 7th, completely botched a short comebacker to the mound allowing Damon to score from first and  Teixera to make it to second.  That Wedge didn't leave Joe Smith, who finished off the 6th with an impressive K (the only batter he faced), suggests that Smith's role really is strictly situational.  Jensen Lewis actually looked good against his first two batters, striking out both Matsui  and Gardner before giving up the eventual game-winner to Jeter.

Offensively, the team did a good job of letting Joba throw himself out of the game.  A few key DPs might have cost them another scoring opportunity or two.  Even still, had Ben Francisco's drive to CF to lead off the ninth eluded  Brett Gardner, the team would have been in a position to win. 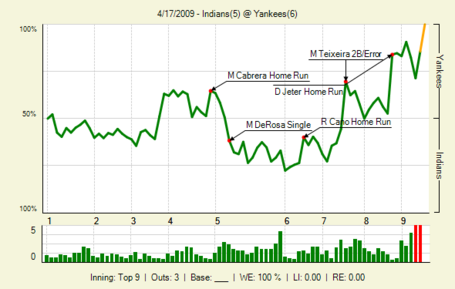