Each victory and each loss over the course of the season contributes equally to the win and loss column.  But not all wins and not all losses are created equally.  Today’s victory was big.  Not just because this is a team that desperately needed to notch its first back-to-back victory.  Not just because the Indians were facing the most successful pitcher Cleveland has developed over the past 50 years, making his home debut for the Yankees.  Not just because the victory involved the first quality start for the pitching staff, coming from the necessary staff ace, Cliff Lee.  Not just because it featured big hits from offensive cornerstones Grady, Victor and Jhonny.  Not just because it was the Yankees.  This victory was huge, because this victory is permanent.  This game will be preserved in the print, digital media, and neural synapses of New York and Cleveland baseball communities for a long, long time.  Cleveland went into New York today and claimed prima nocta, and that is something that no Steinbrenner and no ghosts of Yankees legends past can ever take back.

And the game itself was good, until the 7th, when it became great.  Although neither Lee nor Sabathia was working very efficiently, they matched zeros until the 4th.  Jhonny Peralta led off the inning with a double, but the scoring opportunity appeared lost after he was thrown out at home.  The very next AB, though, Kelly Shoppach took an 0-2 pitch from Sabathia and nearly hit a HR, settling for an RBI double as Johnny Damon’s feeble throwing arm allowed Francisco to score the first run in the new stadium.  The Yankees came back in the 5th and tied it up with a Jorge Posada HR.  A Trevor Crowe single with two outs in the 6th ended Sabathia’s day after 122 pitches and turned over the tie game to the Yankees bullpen.  Lee made it through the 6th before he also gave way to the bullpen.

And in the 7th, things got fun.  DeRosa lead off the inning with a walk, followed by a Victor double.  Jhonny Peralta hit his second scorching double to RF to give the Tribe a two-run lead.  A hit batsman and botched fielding effort on a Francisco bunt loaded the bases for Kelly Shoppach, who again came through with a clutch RBI-hit.  After a Graffanino popout, Crowe did what a rookie should do, not get out, inducing a bases loaded walk.  It was 5-1 at this point, one out, bases loaded, but the game still felt too close for a team that hasn’t had anything come easy so far.  And then Grady hit a grand slam, the first in the new stadium's history.  Victor’s HR an out later was an afterthought at this point — fans were leaving their $1000 seats in the 7th inning, and Cleveland had won. 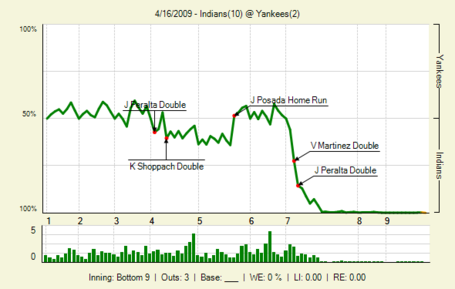