Today, the Indians got their second win of the season, their first on the road. Aaron Laffey did some good, finishing just two outs shy of notching the Indians first quality start of the season. But, as has been the case all year, the bullpen moved quickly to give the Royals control of the game once Laffey headed to the bench.

Joe Smith replaced Laffey and got a big strikeout before giving way to Jensen Lewis. The Commodore walked three straight batters, allowing a run to be charged to Aaron Laffey and tying the game. Jensen got the reliably mediocre Miguel Olivio to groundout and end the inning but the patient was in critical condition.

It was in the top of the 7th that Indians finally took control for good and finally put together a normal looking inning of offense without any homeruns: Cabrera double, DeRosa RBI-single, Martinez walk, Hafner double, Choo sac fly. Indians 5, Royals 2.

Lewis came back out for the bottom of the 7th and allowed a run of his own to score then came back out again for the 8th inning and promptly allowed Mike Jacobs to homer and bring the Royals to within a run. Finally, after 41 ineffective pitches, Wedge took the ball from Lewis and handed it to the, at least for today, capable hands of Rafael Betancourt.

Betancourt built the bridge to Wood who earned his first save as an Indian. Wood retired the Royals on just 7 pitches, making it 20 pitches total for his last 6 outs.

Coming into the season, every Indians' fan had some form of this mental checklist: 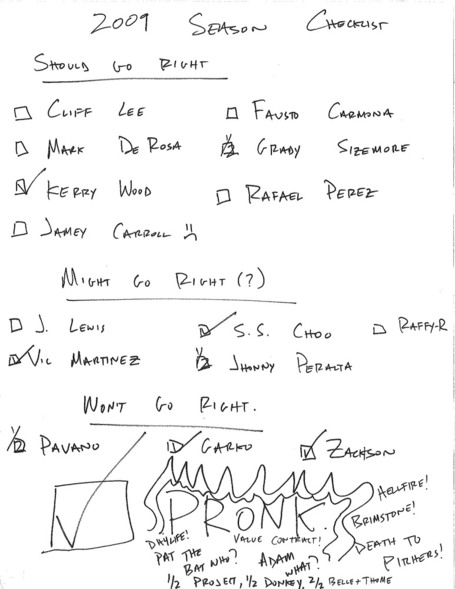 One of the most frustrating parts of the early going has been wasting all those checks on the bottom (especially that giant one); it's been bizarre to watch the team get gigantic contributions you never expected while getting basically nothing from your "safe" assets (ahem, top of the rotation). It just doesn't jibe: wait, Hafner is great and we're not winning games? As intelligent fans, we of course realize that this is all just the surf of small samples crashing against the beaches of bad luck but it doesn't make it feel any less frustrating.

Today, like April 9th, 10th, and 12th, felt like it belonged to our gigantic checked box, Travis Hafner. Pronk is now hitting .286/.412/.714. That is so wonderful I can't even express how it makes me feel, however, some of the top check boxes need to start getting filled.

And, finally, all uniformed personnel across the majors are wearing number 42 today to commemorate the debut of Jackie Robinson on April 15, 1947. Thank you, number 42. 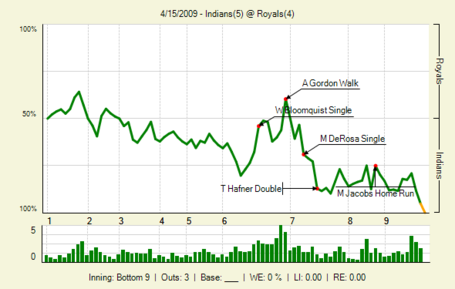