The good news: Carl Pavano lasted six innings, and gave the Indians as good a start as they've had this season. Given that his outing (6 IP, 4 ER) isn't considered a quality start even by the modern, watered-down definition, it says a lot about the state of the Tribe rotation, but I'm forced to look for relatively good news here.

The bad news: virtually everything else about this game, from missed opportunities to the bottom of the eighth inning, or more broadly, the slow and inevitable feeling of the game slipping away as the ninth approached. Of course, the Indians didn't get to see Joakim Soria, the Royals closer, as Rafael Perez and Vinnie Chulk teamed up to allow a five-run eighth inning, 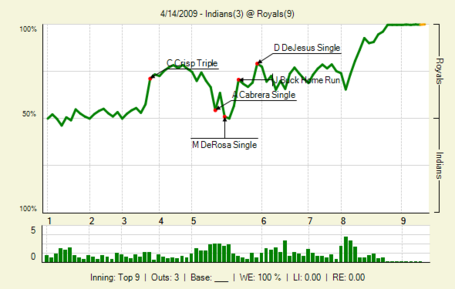