Carmona again fought himself, but the game was well within reach of the offense, though only in the ninth inning would they capitalize on a scoring opportunity. Throughout Zach Greinke's five-inning start, Tribe batters were constantly in scoring position, but Greinke didn't make mistakes in crucial at-bats, and Indian hitters at times helped him out by chasing pitches out of the zone. Like yesterday's starter, Greinke didn't last long, and piled up a lot of strikeouts, but unlike David Purcey, he finished the fifth, and more importantly handed his bullpen the lead.

After Greinke left, the Indians didn't put up much of a fight. Likewise, after Carmona eked out his five innings, Tribe relievers did a good job, keeping the deficit at four. It wasn't until the top of the ninth that either side managed a rally. The Indians greeted Ron Mahay with two singles, then, against closer Joakim Soria, Grady Sizemore and Shin-Soo Choo singled, the latter hit scoring Cleveland's first run. With the bases loaded and nobody out and with the heart of the order up, everything seemed aligned for the Indians to complete a ninth-inning comeback. Things got even more advantageous when Soria uncorked a wild pitch, plating the second run of the inning and moving runners to second and third. The double play was now taken out of play, and all the Indians needed was a single, or two run-scoring outs, to tie the game. But Soria struck out Martinez, enticed Travis Hafner to ground out weakly, and dropped a sloooow curve into the strike zone to strike out Jhonny Peralta and end the game. 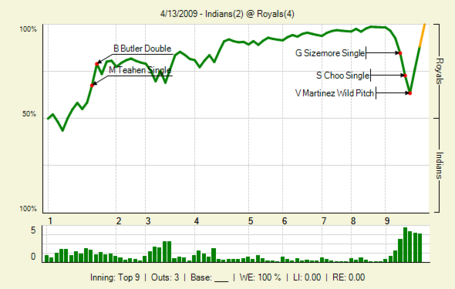