Our Place In The Sun

Share All sharing options for: Our Place In The Sun

If the season were to end right now, at this very moment, today, the 2009 Cleveland Indians would be the worst pitching team you've ever seen, in spades. Their team ERA is a spectacular 8.82. Opponents are OPSing .982 when facing Indians' pitchers. The pitching staff has walked too many batters (25), not struck enough batters out (41), hit too many batters (3), allowed too many homeruns (10), and won too few games (1). In short, if the last 156 games of the season were canceled tomorrow it would be no contest: worst pitching staff ever, easily.

Obviously, that's a lofty title and one that this staff is not going to just luck into. They would have to keep the pedal far, far from the floor for the for the next 156 games if they're going to be the worst ever. Everybody would have to give far less than their full effort; some individuals would fail spectacularly but others would need to put in a workmanlike failing effort. It's harder than it looks to just show up and fail at the little things, day in and day out. 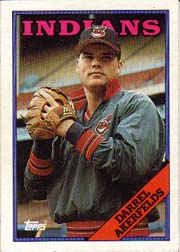 With apologies to the 1985 Tribe and their franchise low ERA+ of 84, I submit to you the 1987 Cleveland Indians.

Those '87 hurlers' stats were so vulgar that no other team could compare. The highest full season team ERA in franchise history (5.28); the most homeruns allowed (210); 9.67 hits per game; worst or second worst in the AL in runs, earned runs, walks, strikeouts, homeruns, WHIP, double plays turned, and saves. There was nothing this team couldn't do poorly.

But how did they do it? What allowed this monstrosity to come to life? Who animated this angry god of failure?

For starters, Darrel Akerfelds. Looks like Darrel was all cock and circumstance on the day Topps came to take his photo but I imagine his collar got de-popped pretty quickly once the realities of 1987 rolled around. The Indians gave up 835 earned runs that year and Darrel gave up 56 of them, good for 8th on the team.

Right now, you're probably thinking "8th on the team? Akerfelds and Akerfelds and pray for more Akerfelds!" However, Darrel surrendered those runs in just 74.2 innings pitched-a 6.75 ERA. There was a run in August when Akerfelds gave up  24 earned runs in 15.2 IP over 4 consecutive starts. All this helped to make Darrel the worst qualified rate-stat pitcher on the worst Indians' pitching staff of all time. At least he got that sweet pullover out of it. 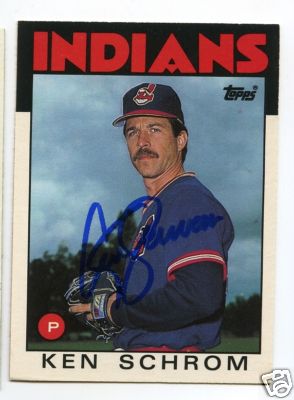 If the current Indians are going to match 1987, they're going to need a young pitcher to explode like Akerfelds and yet still get innings somehow. This isn't a hard one; Sowers' 2006 was a near carbon copy of Akerfelds' 1987.

It's easy to scapegoat Darrel Akerfelds but ultimately it doesn't make any sense; sure, DA the elder gave up 7% of the team's earned runs but he also pitched only 5% of the team's innings. Besides, how's a young pitcher supposed to develop when he's got a 32 year old who's second on the team in IP yet second worst on the team in ERA as a role model?

Ken Schrom. In his first start of 1987, he went 3 innings and gave up 6 runs. In his second, he went 1 inning and gave up 5 runs. With these audition performances done, Schrom settled down and made 29 starts. This is how you compile the worst Indians' pitching staff of all time-you show up every day and do your job, badly.

Schrom failed to make it to the fifth inning in 15 of these 29 starts. He gave up 5 runs or more 9 times. And, somehow, he threw three complete game wins.

Basically, if the 2009 Indians want to find a Ken Schrom in their midst, they're going to have to give Carl Pavano 29 starts (and three relief appearances) and he's going to have to self-immolate every other start.

Who kept trotting Schrom out? Pat Corrales, for the first half of the year, Doc Edwards for the remainder.

Based on this photo, I'd hire Pat Corrales to manage the Indians or be my grandfather, right now. He looks awesome. Once Corrales was relieved of his managerial duties, Doc Edwards took over. I know it seems impossible but I'm pretty sure that's the same pullover that Akerfelds was wearing. Man makes the clothes, not the other way around.

There were, of course, some bright spots for the 1987 Tribe. Two hall of famers appeared in 45 games for the Tribe. Those hall of famers were 42 year old Steve Carlton and 48 year old Phil Niekro, who were 8th and 9th respectively on the staff in ERA (5.37 and 5.89). Carlton only recorded a Game Score below 10 five times in his career. Three of those were in 1987, inlcuding his all time low of 3.

The 2009 Indians have no one on hand to do what Carlton and Niekro did. Essentially, the Indians need to sign Pedro Martinez and get Phil Niekro to come out of retirement.

The rest of the Indians starters turned in decent performances: Tom Candiotti, Scott Bailes, Greg Swindell, and John Farrell took most of the rest of the starts and turned in ERA+'s approaching 100.

Let's turn to the bullpen. To give you an idea of how insane this bullpen was, consider that only two pitchers who appeared for the 1987 Indians didn't at some point appear out of the bullpen. Everyone but Candiotti and Niekro worked a portion of an inning in relief. I can't possibly do this group justice:

Doug Jones had 144 ERA+ in 1987 and would save an average of 28 games per season over the next 8 seasons. The worst Indians' pitching staff of all time had a shut down closer at the back.

The 1987 Cleveland Indians used 21 pitchers. Of these:

The 2009 Cleveland Indians staff so far has featured two pitchers (out of 12) with a career ERA+ under 100: Pavano and Zack Jackson.