Anthony Reyes introduced sanity to the starting rotation today by going six innings, placing the offense and the bullpen in a much more tenable position. Reyes ran into trouble in the sixth inning, though not all of it his doing. He walked Marco Scutaro to open the inning, but then got Aaron Hill to fly out. Alex Rios then drove a deep but catchable ball to the right field wall, but Shin-Soo Choo lost the ball in the sun, allowing Scutaro to score. Vernon Wells then took him deep to cut what was a comfortable 4-run lead to 1.

In the seventh, the first two Jays reached base, and a sacrifice moved them to second and third. Enter Jensen Lewis, who got out of the jam without the runners advancing any farther. His 1.2 innings of work was by far the most valuable contribution to today's win.

The Indians were a Three True Outcomes offense today, walking 10 times, striking out 11 times, and hitting two home runs. Toronto starter David Purcey struck out 10 hitters, but he also walked 6; all those pitches limited his outing to 4.2 innings. After the fifth inning, the Indians continued to get on base, but couldn't break things open until the eighth, when Pronk blasted a two-run homer to right-center. Shin-Soo Choo added another run with a single (the first RBI single of the year, for whoever keeps track of these things), and pushed the lead to four. Kerry Wood came on for the ninth, even though it wasn't a save situation, and disposed of the Jays quickly, striking out the side. And with that, our long regional nightmare is now over: the Indians have won a game.

Next Up: The red-hot Indians take their winning ways on the road. Carmona vs. Greinke, 8:05 PM. 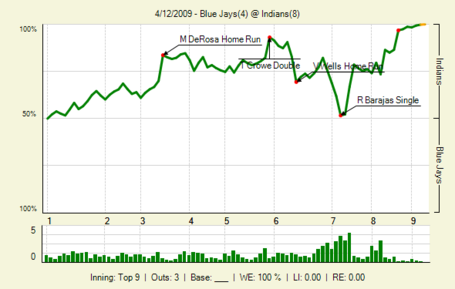