The Indians made the game interesting in the ninth thanks to Blue Jays closer B.J. Ryan, but the previous eight innings were rather depressing.

Cliff Lee muddled through five innings, not being able to spot his fastball like he did last season. Every pitcher, no matter his arsenal, needs to spot his fastball away from the hitter's nitro zone, but Lee especially relied on his fastball in last year's Cy Young run, throwing it 70% of the time. Today his fastball was up, not down, and not on the corners. The Jays scored three runs off him in the first two innings, the third scoring after Kelly Shoppach dropped the ball while tagging out Kevin Millar at home plate. That run was the difference in the game.

The offense had an early opportunity against Roy Halladay. In the second inning, Shin-Soo Choo singled, and Jhonny Peralta followed with a double. Choo could have scored on the play, but he missed second base on his way to third, and had to go back to touch the base. Still, there were runners on second and third with nobody out; even with two outs in the play, the Indians could have gotten those runs home. Instead, both Ryan Garko and Kelly Shoppach struck out, and Ben Francisco flew out to end the threat. And as with most aces, Roy Halladay settled down as the game progressed, fending off just a couple minor threats in his seven innings of work.

Because Lee was over 100 pitches after five innings, the Indians were forced to again call on a tired bullpen to eat innings. Vinnie Chulk, who had just arrived from Columbus, gave the Indians some length, relieving Lee and pitching into the eighth, which was probably an inning too long. That he pitched into a third inning was due to the four previous short outings by Indian starters; in a normal situation, he would have been taken out after one or maybe two innings.

The Indians rallied for three runs in the ninth, even with Kelly Shoppach grounding into a double play early in the inning. Closer B.J. Ryan allowed five base runners, three of them reaching on walks, before he was lifted for Jason Frasor. With a runner on second, Frasor struck out Victor Martinez to end the game. 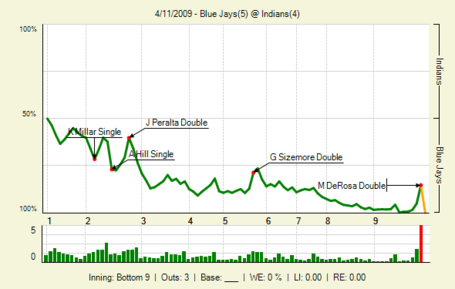