The home opener started well, but turned ugly with the weather, and only got worse as the afternoon turned into evening and then night. The result was a miserable 13-7 loss, and the first 0-4 start for the Indians since 1985.

Only a nearly-four hour delay stopped the Blue Jays offense. The Indians' run prevention today resembled a swinging gate, opening with the slightest pressure. If it wasn't the long ball, it was defensive miscues. All five Indian pitchers gave up runs, some of them unearned. Scott Lewis was pulled in the fifth after giving up his fourth run, and just after Rafael Betancourt was announced, the umpires stopped play. Betancourt, who was on the mound when the game resumed, was probably the most effective of the four relievers used, giving up a run in 1.2 innings. Rafael Perez presided over the back-breaker, the six-run eighth; that inning was fueled by errors, including Asdrubal Cabrera throwing wildly to first, failing to force Kevin Millar, who had fallen down out of the box.

Throughout the game, the Tribe offense continued to produce; the Indians hit five extra-base hits, including three home runs. Travis Hafner almost left the yard in the first inning, then hit one out in the third. Victor Martinez hit his second home run, tying his 2008 total. Victor's home run kicked off a three-run inning that tied the game, but that was the high-water mark for the Indians.

The pitching thus far has been consistently awful. The starters haven't pitched even into the middle innings, and the bullpen has kept leads out of reach of a game offense. With no off days until the 20th, Cliff Lee has to give the Indians at least six innings tomorrow, otherwise the Indians will have bring up some fresh arms. Maybe they won't wait until tomorrow.

Next Up: A matchup of the best pitchers in the AL last season. Cliff Lee vs. Roy Halladay, 1:05 PM 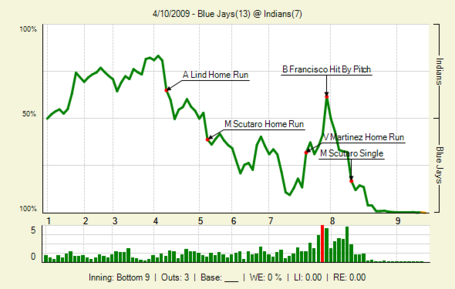