View from Peoria (with Shapiro and Antonetti)

Share All sharing options for: View from Peoria (with Shapiro and Antonetti) 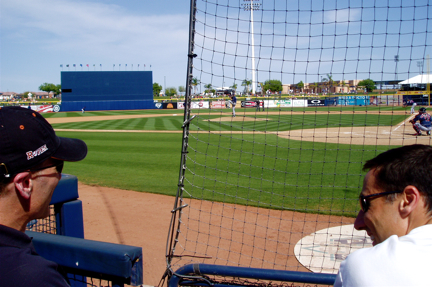 So I wander up to the ticket window at Peoria for today's game at about 11:30 and ask for something behind home plate. She says she can get me 2nd row.  I say, "sounds good."  Little did I know I would end up sitting right behind Chris Antonetti (right in the picture above)  for the game and Mark Shapiro (left) for the last 4 innings.  I introduced myself, but I'm naturally pretty hesitant to insert myself too much into the conversations of people I don't know, so I didn't do much other than that.  I did however listen in on their conversations and peek over their shoulders a bit during, what turned out to be, a great game.  Some thoughts and observations from the game...

First off...Antonetti spent much of the first part of the game reading through scouting reports from other teams which appeared to be little more than a reprint of the stuff you get off Rotoworld.  I did notice, however, that while Antonetti didn't pay much attention when the Indians were at bat, he watched every pitch Pavano threw.

My reaction to Pavano's outing was that I thought he got very lucky.  His breaking stuff seemed to be working and clearly had the Padres hitters off-balance.  But his fastball, especially over the first three innings, didn't seem nearly as effective.  I thought he was afraid to throw it in the strike zone and as a result was dancing around the zone for the first couple innings.  When he was in the zone the Padres were making pretty solid contact.  Although his final line doesn't look bad, I thought he was one cracked Brian Giles bat away from giving up 5 runs instead of 2.  For what it's worth, I'm pretty sure I overheard Shapiro and Antonetti say they were pleased with his outing and that after getting his pitches up the first few innings, he brought them back down and did a better job of getting some sink on his pitches.

Hafner is still a big guy, but talking with someone else, Shapiro acknowledged he's lost 15-20 pounds.  I thought he looked better at the plate than yesterday, but still not great.  He made solid contact on his first inning single but didn't get any elevation on any of his hits.  Shapiro said he has consistently gotten himself into great hitters counts this spring, but has been behind on everything he's swung at.

When Crowe hit his HR to right (which was huge), Antonetti and Shapiro exchanged a raised eyebrow glance.  After the inning, chatting with Skinner and Wedge, Shapiro said something along the lines of, "Joel told Kelly that's how you hit a real HR".

Shapiro and Antonetti seemed impressed/happy with what they saw out of Wood, Smith and Chulk.  They said Wood was working on his cutter in yesterday's minor league game and were pleased to see him get a little extra work (courtesy of awful defense) today.  They seemed impressed with Smith.  I wasn't sure if these comments were about Chulk, but they were made by Shapiro while Chulk was pitching - "He's better than Kobayashi," "He's one of the top 12 guys we have in camp," "I've had four GMs tell me how good he looks."  So I think things look good for Chulk, although Shapiro told Antonetti they're not in a position where they have to waive him (i.e. they can send him down to Columbus, at least for awhile).

Antonetti said it is a privelage to watch Sizemore play.  Marte looks like a guy who doesn't know exactly why he's out there.  The errors yesterday and today were both just terrible.  That said, his HR to left center was impressive.

All in all, an awesome game.