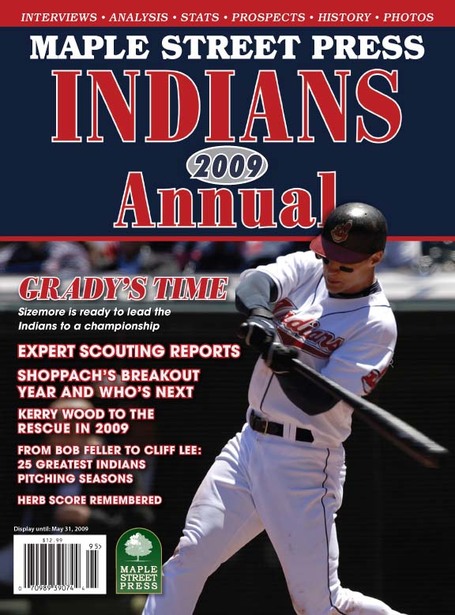 I'll start by saying, for anyone on the fence about buying this book [link fixed!]... Andrew "afh4" Humphries is the Photo Editor, meaning that he selected all of the 130 or so photos in the book and wrote all the captions.  And no, I am not kidding.  A lot of people put in a ton of work helping me this book, but none moreso than Andrew, who collaborated with me on every page.

I'll continue by saying that you will love not only what is written in this book — here's the complete contents — but also the list of guys who wrote it:

What is it?  It's an Indians 2009 season preview, in the format of a 128-page, full-color book.  There are a bunch of player profiles with charts and graphs and stuff.  Then there are a bunch of feature stories, analysis pieces and interviews.  Then there is a significant section on the farm system, and finally a great section with historical and nostalgia articles.  Every diehard Indians fan should own two of these — one for the den, and one for the bathroom.  Web orders will ship on Feb. 16, and the book will go on sale in book stores and on newsstands throughout Northeast Ohio (and Columbus) on March 3.

Is this a LetsGoTribe book?  No, it isn't ... and yet admittedly, it kind of is.  It was not conceived as an LGT book, and it isn't one.  But there's no denying that if there was an LGT book, it would have more than a few things in common with this one.  (I mean, come on, Andrew is the photo editor, can I really claim it's not an LGT book, at least a little?)  You will notice familiar themes being raised and even a couple of hidden in-jokes.

Wait a second ... you interviewed Chris Antonetti?  Yes, I spent almost three hours interviewing him over a series of sessions in late December and early January.  He was very generous with his time, and although the Indians are protective of their statistical methods, I think we still had a pretty great conversation.  It is a big piece of the book — 10 pages — but since there was so much material, I will be publishing some other parts of the interview here.  The parts of the interview that are in the book, however, will not appear anywhere online.  We actually got great access to both Indians staff and players, interviewing Travis Hafner, Kelly Shoppach, John Mirabelli, Brad Grant and Bob DiBiasio, and we had some help from Indians marketing and the minor league clubs as well.  The Indians were very cooperative and supportive.

Who is this Maple Street Press?  Maple Street Press is the very fine sports book imprint that is releasing this tome, under the leadership of publisher Jim Walsh, whose vision is to produce "Internet-era sports books," utilizing writing talent that first came to prominence on the web.  They have been publishing team annuals in several sports for several years, starting (regrettably) with the Red Sox and Notre Dame football, and expanding to five baseball books and a number of college programs, including the Buckeyes, as of last year.  This year, they are publishing annuals for eight baseball clubs.  Our book follows a standard MSP format, but without wanting to take anything away from their other fine books, I do think that ours sets a new standard.  (Although I suspect that the Cardinals Annual, edited by Larry Borowski of Viva El Birdos, will also be really good.)

A note on the quality.  This is not a "fan publication" or an amateur endeavor.  MSP has a well-oiled operation with a talented production team.  We had access to a huge library of photos plus some private contributions, and we had a respectable budget for the writers.  I want to give a shout-out here to Voltaire, whose comments several weeks ago really spurred me on while I was working on this.  Of course it was a great to get paid to do this, but even more than that, it was a pleasure that I got to hire Ryan, Paul, and Adam, among many others.  Volt, you were right — these people should be getting paid to write about the Indians.

A note about the stats:  Like this site, the book is not about statistical analysis, but it is "analytically sound" — not a lot of discussion about batting average, RBI, or a pitcher's winning percentage.  It is, to coin a term, post-sabermetric — it's not about statistics, but it treats the basics of sabermetrics as they should be treated:  As settled principles that were well established 10 to 20 years ago.  Adam's big prospects piece does make heavy use of stats like FIP, and it includes luck/park-neutralized stat lines for every ranked prospect, courtesy of MinorLeagueSplits, as well as a couple of new stats, "Progress score" and "Net," which we developed in part because we wanted to include them in this book.  Ryan's big Pitchers piece makes heavy use of ERA+ and PRAR.

Why didn't you ask me to write something?  It is inevitable that LGT folks are going to attach some kind of status to who got asked to contribute to this book — and I won't even tell you that's wrong.  I will say that there are at least 20 people who are LGT regulars who I would have been happy to have writing for this book, and I just asked the ones who made the most sense for the specific articles I wanted to include.  And it didn't help that only one person declined an invitation to contribute, out of 14 who were asked.  (That one person, sadly, was Scott Raab, who had too many other concurrent commitments.  Scott's indirect influence is all over the book regardless, despite the lack of F-bombs.)  I had a short list of mainstream writers that I wanted to ask, and the publisher brought Laurila and Gennaro to me, and we worked articles for them to do.

For the bulk of the book, I quite naturally turned to Ryan and Paul (The DiaTriber) to write significant chunks of the book along with me.  Paul and I wrote the main analysis pieces in the season preview, and Ryan wrote a massive research piece for the history section. Asking Adam (APV) to write the massive prospect overview was another obvious call.  The four of us collectively wrote about half the book.  (In a hilarious twist, Ryan was not available to write significant parts of the 2009 season preview section, because he had already been signed by another publication — he wrote the Indians season preview for the Hardball Times 2009 Annual.  Good Lord, people, how am I supposed to field a winning team when I can't even sign my own players?)

After getting those guys on board, I asked LGT regulars who had established a high level of writing quality and also who had established a particular interest in writing at some length about a specific topic.  You might think of this third group as the "bench," but that would be a mistake.  To a man, they turned in really great material that are some of the best pieces of the book.  There are many other folks here who might have made great contributions, but the guys that I did ask definitely did so.

Wait a second ... don't I read your stuff for free every day?  Isn't this just a re-hash?  Why would I pay for this?  My first point would be that you can't easily take a blog into the bathroom.  It is true that if you read everything on LGT and The DiaTribe, then the massive 2008 post mortem and 2009 preview that Paul and I wrote together won't be entirely new material for you, and for that matter, the Posnanski piece on Herb Score and the "Acquiring the Indians" spread as well.  But there is a lot of new and updated material in those pieces, and the great majority of the book is stuff that has never been seen before in any form, on the web or in print.  There is a "five-year projected depth chart" that will make you crap yourself.  Tabs' piece on Hafner is tremendous, fleerdon's piece on amateur scouting and signing is utterly unique.

I asked Ryan, Paul and Adam to elevate their games, surpassing even their best blog-based work, and I think you will all agree that all three of them very clearly did just that.  Ryan's Starting Pitchers: The Top 25 Seasons is in the mold of his classic "top seasons" pieces, but it goes well beyond in both scope and depth of research.  Adam establishes himself as the mack-daddy of Indians prospect analysts, with all due respect to Tony and everyone else.  Paul and me — well, you'll see.  We've all had some cool blog entries, but this book is basically like a phenomenal day of Indians blog content, times 20, and that you can put in your bathroom.

You making money off this?  Everyone was paid a specific fee, including me.  None of us have a profit stake in the book's sales, but of course we have a stake in terms of being able to do this again in the future, and on what scale.  So, you know, buy 20 of them.  They make great gifts.