Indians or The Field?

Share All sharing options for: Indians or The Field?

With Jason Bay headed to Queens, the list of available free agents is slowly shrinking. The 2010 Indians don't look to be a knock-em'-out-the-box-Rick kind of squad. If, for just the 2010 season, you could choose from either a lineup composed of the remaining free agents or the Indians, who you got? I'll be using Bill James' projections (because they're freely available) so whenever I reference them, you can find them with our friends at FanGraphs.

Cleveland LF-Michael Brantley: The Indians seem to really, really like Brantley and with good reason. James has Brantley at a .677 OPS. On first blush, that seemed a little pessimistic to me but Brantley only spat out a .707 OPS last season (I guess it just felt better). I think he'll get to .700 again but it'd be both thrilling and somewhat unlikely to watch him go much higher. He can run like the devil, though.

Verdict: On a one year basis, you take Holliday and call it a day. I think there's a decent chance Brantley is more valuable, cost considered, over the life of Holliday's contract, though. It'd help if Brantley was actually considered a good defender. In the tense "wRAA" (that's Runs Above Average based on wOBA) battle, it's Holliday by a score of 37.2 to -4.9. Oof.

Cleveland CF-Grady Sizemore: If Grady returns full strength in 2010 that will be a very good thing. Grady's an .850 OPS guy with some upside left. He's a good, if perhaps not great, defender and he's the best player in Cleveland now that, ahem, everyone else is gone.

Free Agent CF-Marlon Byrd: Marlon Byrd has had an interesting career. He couldn't hit at all early in his career, despite being a very good minor league hitter for his position. He's just sort of Little Engine That Could'd his way into a career, if at the end of the story the Little Engine figured out he could go play in Texas. In 2008 it looked like he'd made real strides, with a career high in BB% (10.2) and a career low in K% (15.4). He gave all that back in '09, though, posting a career low in BB% (5.5). His numbers stayed alright, propped up by an absolute power explosion (65 XBH's in '08 vs. his previous career high of 42 in '08). All of this is a circuitous way of saying hitting a baseball must be hard and confusing. To the point, Marlon Byrd has a career .820 OPS as a Ranger and .701 everywhere else. He's also going to be 32 this year.

Verdict: Despite the sudden interest I've apparently developed in Marlon Byrd, it's Grady going away. Grady's better at basically everything and much younger. By wRAA it's 21.8 to 2.9, Sizemore.

Sheehan said he though Choo would get at least one vote in the AL MVP race this year. James thinks Choo is going to take a step back (.850 OPS, losing 20 points off of his SLG) despite having two monster years in a row. I'm not going to bet against Choo, ev 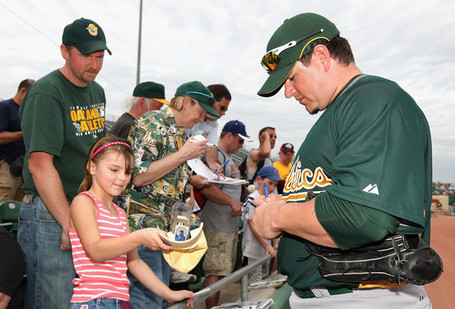 er. He did that thing where he hit the wall on purpose in Spring Training, or whatever.

Free Agent RF-Jack Cust: I'm putting Cust in here but neither he nor any of the other viable candidates (Dye, Randy Winn, Vlad, Nady, Gomes) can really play RF. Cust has hit at least 25 runs in each of the last three seasons and James projects him to do that again. He's a nice little player if you can hide him at DH or something, I guess.

Verdict: Choo and then Choo again. Choo over all of the available candidates, combined. He's sitting at 23.6 wRAA and Cust is at 20.7 wRAA but I'm going to dock Cust, let's say 10 runs because of my idiotic plan to play him every day in RF.

Cleveland 3B-Jhonny Peralta: The JP story is well told. Pencil him in for a 15 homeruns and a lot of frustration.

Free Agent 3B-Adrian Beltre: I almost went with Miguel Tejada here but Beltre is supposed to be a supernatural defender or whatever. This is a race we might get to follow closely as Sheehan, in the same chat linked above, made the point that Beltre is a pretty liekly candidate for Minnesota: they need a 3B, he can defend, voila! Gardenhire is happy.

Verdict: I never thought I'd quit on Jhonny but I'm pretty much there. Take Beltre and save yourself the headache. wRAA projections actually put Jhonny ahead (1.6 to 0.0) in a race of negligible assets but Beltre's got the glove. I'll give him 5 runs for that.

Cleveland SS-Asdrubal Cabrera: Everybody likes Asdrubal. If you don't, you're an idiot. He OPSed .799 last year as a 23 year old. He is ten months older that Matt LaPorta. His 2009 was a dead-ringer for Alomar's age 23 season: exact same OPS+ and everything.

Free Agent SS-Miguel Tejada: Is Tejada actually a servicable SS? I have no idea. I can't trust the fact that Ed Wade let's him play there any more than I can trust Ed Wade to value relievers. Tejada has been hitting for a really long time and I guess he's got an outside shot at some big longevity numbers if he stays in the NL-he's only a couple of seasons short of 2,500 hits and he's a lock to get over 300 homeruns. I had kind of assumed he'd gone to die in Baltimore but hope springs eternal in the world of Miguel Tejada.

Verdict: I'm just going to assume Tejada's a butcher out there. You've got to take the 24 year old over the 35 year old when they're projected for vaguely similar numbers. Cabrera wins the wRAA showdown, 8.3 to 6.2.

Cleveland 2B-Luis Valbuena: I'm guessing LV's going to get most the run at second this year, though we might end up seeing him platooned a lot and we also might just see a lot of Jason Donald, platoon or not. I still like Valbuena a lot, despite the underwhelming '09 numbers: he didn't walk at all in the majors, which was weird because he's always walked in the minors. Anyway, James doesn't hate him, which sort of surprises me; he's got Luis at a shiny .722 OPS, which is nice to see.

Free Agent 2B-Orlando Hudson: A year ago it seemed like Hudson was going to be a FA prize and then the market cooled on him. He didn't do a lot of help in his single year in LA, posting his first sub .800 OPS since 2005. He should probably just sign back with Arizona. The dry heat was working for him.

Verdict: Hudson. Valbuena's status is shaky, to say the least, and I think it's unlikely that he (or even the combined Indians' 2B line) outperforms Hudson's cagey veteranness. Hudsons' got the wRAA 4.2 to -3.4.

Cleveland 1B-Matt LaPorta: I think this is how it's going to play out. The whole gang seems to like Brantley too much to send him back to Columbus, nobody ever liked that Andy guy anyway, and LaPorta's glove isn't exactly insisting he be forced to play LF (although it doesnt' look like it's nearly as bad as we were told. Then again, we watched the ghost of Trot Nixon play the outfield). LaPorta needs to flash some serious bat and James says he'll make an effort, with 20 HRs and 29 2Bs. 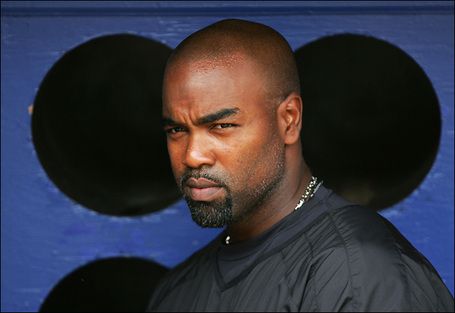 Free Agent 1B-Carlos Delgado: Delgado can hit, period. Before last season, he'd been remarkably healthy in the twilight of his career: he's had at least 500 ABs in every year since 1997, excepting 2004 and 2009. He'll have a little extra motivation this season as he's 27 homeruns short of 500. Sidetrack: is this guy a hall of famer? He's sort of 50/50 on all of the B-Ref HOF trackers; if I had a vote I guess I'd probably cast it for Delgado out of spite towards Jim Rice supporters.

Verdict: Delgado is probably going to have a better year. wRAA projections agree: 14.2 to 7.4. I think this one is as close to a push as any spot on the list; I'll be interested to see LaPorta's breakout percentiles from BPro. He's got to have a decent shot at exploding.

Cleveland C-Lou Marson: Cleveland's catching situation is decidedly unsettled. There are plenty of candidates, including a very well regarded one looming in the background. Marson is probably going to get on base quite a bit, look of purposefully in the direction of Grady's Ladies, and eventually give way to the best young catcher in all of baseball. Then, he'll either be a sweet backup or be traded for a damaged goods starting pitcher that confuses everybody. Kidding, Mark! Love ya, big guy!

Free Agent C-Bengie Molina: I need to purge after looking at the available free agent catchers list: Brad Ausmus, Paul Bako, Rod Barajas, Michael Barrett, Toby Hall, Jose Molina, ugh. There must be no need for catchers this year if this was the group and no one bit on Shoppach.

Indians DH-Travis Hafner: James thinks Hafner will take another step forward performance wise (.880 OPS) but will stay on the shelf just as much. Whatever.

Free Agent DH-Jim Thome: It's tough to get a gig as a DH these days. Thome raked last season, again, to the tune of an .850ish OPS. I'm not sure where he'll end up but...

Verdict: He'll be more valuable than Hafner just on the basis of time served. He tops Hafner in wRAA, 20.6 to 14.9.

Overall: Let's get the numbers out of the way: the Indians are projected at about 70 wRAA as a team next season. If I've got this right, this means they'll be 70 runs better than a lineup composed of 9 perfectly average players. The FA squad grades out at 92.4 wRAA.

I docked Cust already for his defense but the entire FA squad looks to be pretty miserable defensively, outside of Beltre. So, in this totally pointless exercise, I'd say it's a wash. The Indians' lineup, as composed above, is probably about as good as an imaginary lineup that plays for an imaginary team with an unlimited budget. The Indians one is cheaper, though.

Would you trade any of the Tribe's position players, straight up, for the available free agents, cost considered? Did I miss any free agents that would've been better selections?