Tomo Ohka got burned for for seven earned runs in five innings, but I guess that's besides the point, for if he starts another game for the Indians, the team is heading for another season like this one. Rafael Perez, in what may have been his last appearance as member of the Indians, gave up 4 runs in just 2/3 of an inning. But, for the most part, the major player moves have happened, and whoever you've seen this month is likely who you'll see next April. I think Andy Marte bought himself another spring training, and the same with Jeremy Sowers. Kelly Shoppach will eventually be traded, but I don't think this winter is the right time to do it.

Of course, there will be a new coaching staff, and their selection should play out by the end of this month. And after that, there's free agency, which the Indians probably won't participate in, and the trade market, which they probably will take a part in. All the while we'll think back on this season as little as possible, and wish the 2010 season to get here with all haste. Thanks for sticking around until the bitter end, and may your reward be watching next year's playoff contender with the satisfaction of remembering when the groundwork was laid for it.

Next Up: A season review. 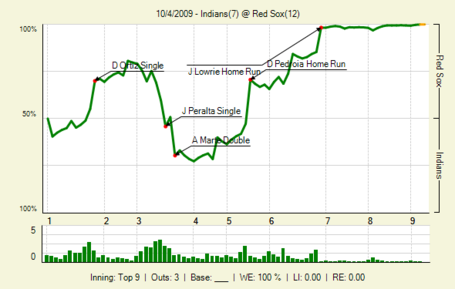