The Indians actually scored some runs tonight, but Aaron Laffey was awful, so the game ended in the usual way.  The two teams combined for twelve runs in the first two innings, with the Red Sox accounting for eight of them. The big blow came on Victor Martinez's first career grand slam, naturally coming against the team that until two months he'd spent his entire career playing for.

Josh Beckett had very little command, missing with his fastball and hanging several curves. He had to throw over 50 pitches to get out of the second inning, but hung around long enough to qualify for a win. After the second inning, the game slowed down to a more normal pace, and true to irrelevant game that it was, Boston's starters were taken out as the contest entered the later innings.

Aaron Laffey gave eight earned runs in just two innings on seven hits and two walks, a disastrous ending to what was a pretty decent season, certainly the best season of the Indians' starters still on the roster. Jensen Lewis, in what was probably his last outing of the season, relieved Laffey and gave up two runs in two innings of work. His future is very much up in the air. Mike Gosling did an excellent job in mopup duty, giving up one run in four innings. 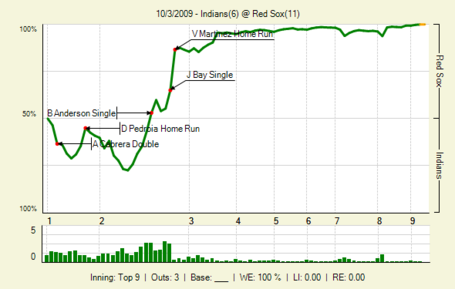