This series so far has to me felt like Spring Training games, though the two teams have different goals in mind for them. Boston's Terry Francona is trying to give his players enough playing time to stay sharp, but also keep them rested and healthy, while Eric Wedge is just trying to get this last weekend over so he can move on to other things. Meanwhile, the Indians lost their record thirteenth straight on the road.

Jeremy Sowers checked out early after giving up 3 runs on four hits and two walks, giving way to a series of relievers just getting their work in. Meanwhile, the offense had a goal to shoot for: scoring a run. The offense hadn't plated a run in over two games, and had to be closing in on some kind of team record for sustained futility. Luis Valbuena and Trevor Crowe finally broke the ice in the fifth off Daisuke Matsuzaka, but they had a couple opportunities before that, beginning with Michael Brantley's double to lead off the game. Matsuzaka took three meandering pitches to accomplish what every one good one would do; if he had to be that fine against this Indians lineup, I don't like his chances against deeper and more talented lineups in the postseason. 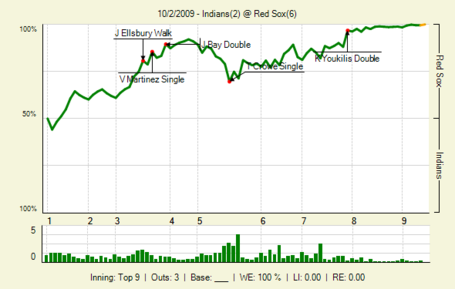