If this game were not a tuneup for Boston starter Jon Lester, the left-hander might have finished the game. Instead, he went 6.1, and let his bullpen finish the shutout. The Indians managed two hits against Lester, and one more against three Red Sox relievers.

The run of promising finales ended at three, as Carlos Carrasco struggled against Boston's patient lineup. To cap things off, he left the game after a line drive hit him flush just above his left knee. Carrasco had to be helped off the field, a rather bad ending to his first major-league stint. The 22-year-old started five games, and went more than five innings just once. It's tough to make a call on this young a pitcher after a month's worth of starts, but to me it would make sense to have him start 2010 in Columbus, have some success, and then bring him back to the majors. 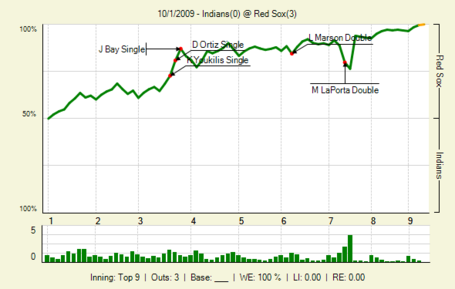