From the Archives: September 25, 1954 Scorecard

Share All sharing options for: From the Archives: September 25, 1954 Scorecard

Several months ago, I received an unexpected treasure trove of Indians history. My grandmother's cousin had passed away at her home in Texas, and my aunt, while going through some of her possessions, came across some Indians memorabilia. Remembering that I was a huge Indians fan, she saved it and sent it up to me.

This relative, whom I never met, grew up in Painesville, and judging by what she left behind, was also a huge Indians fan (it must run in the family). The centerpiece of her Indians collection was a scrapbook detailing the 1948 World Champions, complete with souvenir programs and lots of newspaper clippings.

Also included was a separate score card. At the time, this was set aside in favor of the scrapbook. Only later did I look at it closely, and realize why the score card was saved.

On September 25, 1954, the Indians played the Detroit Tigers at Cleveland Stadium in front of 8,647 fans. Early Wynn was making his last start of the regular season, and going for win #23. The Indians had long ago clinched the American League pennant, but now each win set an American League record. This day they were going for their 111th victory. 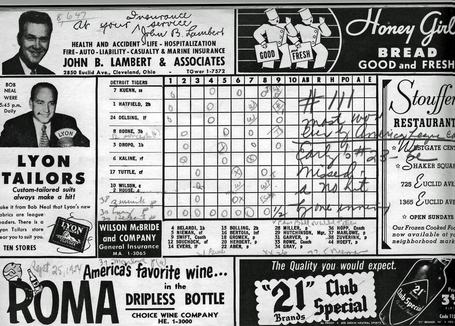 and here's the Indians' half: 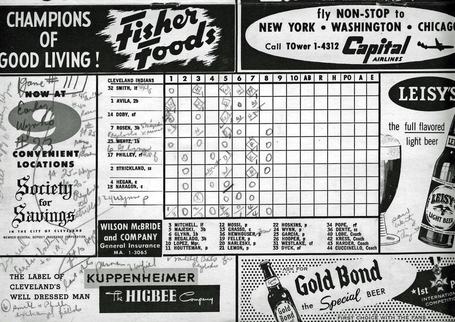 The final score of the game was Cleveland 11, Detroit 1 - here's the box score. Wynn threw a complete game, and went into the ninth three outs from a no-hitter. Fred Hatfield broke up the no-hitter with a single with no outs, and Bud Souchock ended Wynn's shutout bid by driving Hatfield in with a triple.

On the offensive side, both Al Smith and Bobby Avila reached base four times, and Jim Hegan was the only starter not to reach via a hit or a walk.