It's official — Sabathia is a jackass

Share All sharing options for: It's official — Sabathia is a jackass 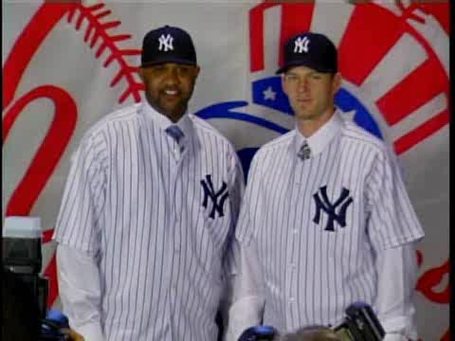 You sign with the Yankees, you're a jackass.  It's that simple.

C.C. Sabathia is a jackass.  Him and that all-time great douchebag, Roger Clemens.

After being introduced today as a Yankee, Sabathia trotted out the usual jackass trope:  "When it came down to it, really thinking about what I wanted, having the chance to win every year. That's something that I talk about all the time. That's the bottom line for me. There really was no other place to go."

No other place to go?  There were plenty of other places to go, highly competitive teams that will fight the good fight to get to the postseason, that will compete for a championship.

What C.C. is really saying:  "I want to have the postseason gift-wrapped like a special gift for me, every single year.  I don't want to have to compete for it and earn it."

The Brewers and Indians will compete for the postseason.  Every player will have to kick and scratch.  The Yankees will not compete; they'll just buy it.

A real competitor doesn't want to win with unfair advantage; he wants to compete on a level playing field. Star players don't go to the Yankees to "compete," they're going there for the loaded dice — and for the cash, of course.  They don't want to have to earn postseason berths; they want titles handed to them on a silver platter.  They don't want to get paid to get to the playoffs, they want to get paid to go to the playoffs.

There were plenty of places to go, but only one place where Sabathia wouldn't have to compete fairly.  He will just be handed a certain measure of success, one befitting  a player of his (ahem) stature.

Here's one final good-bye, then, C.C.  We had a great run together.  You gave us some great seasons, the best career of any Indians pitcher since Sudden Sam.  You left us with a nice little cache of prospects, too.

But you're just another jackass now.