Parts Two (7-5) and Three (4-1) will be appearing on Monday and Tuesday, respectively. 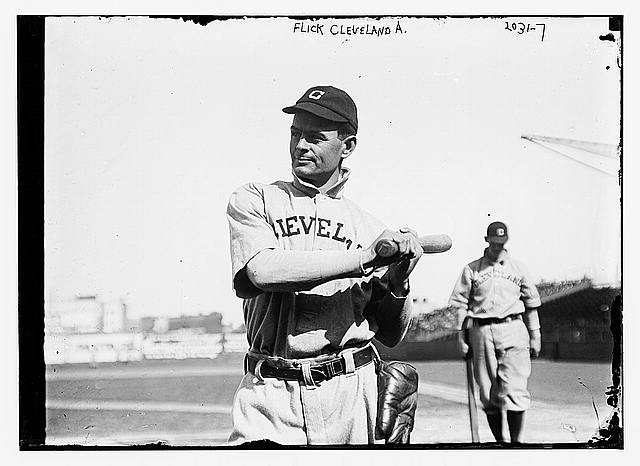 The lone Hall of Famer on this list, believe it not. Flick came to Cleveland after he and Nap Lajoie were banned from playing in Philadelphia; the two had jumped from the Phillies to the cross-town Athletics after the 1901 season. From the Sporting News (5-8-1901):

Manager [Connie] Mack is preparing to foil the attack of [Phillies owner] Colonel Rogers as far as possible. He has let Elmer Flick go to Cleveland under an arrangement with [Cleveland] President Kilfoy...

As mentioned earlier in this series, Flick's numbers look pedestrian compared with today's run environment, but Flick was one of the best all-around players of his era, able to steal a base and hit for power. He lead the AL in triples three straight seasons, and finished at least third in OPS+ from 1904-1907.

Flick is perhaps best know not for his Hall of Fame career but for almost being traded for Ty Cobb. Flick was in his early thirties, and Cobb was just 21, but Cleveland elected to keep Flick, at that time one of the best players in the AL. But a "stomach ailment" soon curtailed his ability, and he wasn't the same after the 1907 season.

Heath, who came within six points of leading the league in hitting in 1938, but who was practically worthless the next two seasons, at this writing was the Indians' No. 1 swatsmith with an average of .431. The young outfielder from the West Coast looks good even when he fails to hit. He has been fielding the ball solidly, hustling every minute both on the base lines and in the outfield.

Heath was 26 in 1941, and he was playing in his fourth season, so this wasn't some phenom exploding onto the scene. He may not have liked Ossie Vitt, who was run out the previous year by the players. But unfortunately, not many of the other regulars had good seasons, as the team finished 7th in the AL in runs scored.

Heath continued to produce for the Indians during the War Years; he was dealt to Washington after the 1945 season for George Case, a light-hitting outfielder. Heath apparently wanted out in large part to get away from "Cleveland and its average-murdering stadium."

"Shoeless" Joe Jackson is not a Hall of Famer thanks to the Black Sox Scandal, but would have been had he retained his eligibility. Like Flick, the Naps acquired Jackson from the Philadelphia Athletics. Cleveland needed a right fielder to fill the outfield void the Flick had left, and young Jackson certainly answered it; his 1911 season entry will have all the details of that campaign.

Jackson's 1913 season, his third best on this list, still had some memorable accomplishments. He solved the age-old trade-off of contact and power, walking 80 times, striking out just 26 times while finishing 2nd in the league in extra-base hits.